Explaining why we think Spinosaurus hunted in water. Credit: BBC

I’ve been re-watching the BBC’s recent series ‘Planet Dinosaur‘. It’s basically a new, modern version of Walking with Dinosaurs. The thing to note is is that they are actually completely different. Walking with Dinosaurs told us what the dinosaurs did, how they lived and so on. Planet Dinosaur does the same but with one important additional feature. They provide the evidence. Parts of each episode swipe away to look at the fossils, so we can see what kind of predator attacked this type of herbivore because of the bite marks left behind, and similar things along these lines. 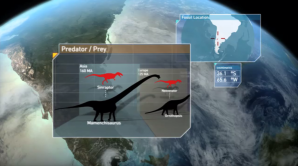 In one episode they even manage to get the complex analysis of oxygen isotope data across to show you that a land based predator hunted in the water. Impressive stuff, the graphics are pretty immense too. It’s also narrated by John Hurt, who narrated Human Planet.

So once again, well done to the BBC, a truly corking job.
The series is available on iTunes too at the moment for only £7.99

We’re familiar with some pretty big animal migrations. The Wildebeest, various birds, and hundreds of other animals. But did dinosaurs migrate? It has long been thought that yes, they did, but there has been no evidence for it…until now.

After studying the teeth from a small species of sauropod, Camarasaurus, that lived in the Wyoming and Utah area during the late Jurassic it appears that these dinosaurs almost certainly did migrate.

During the late Jurassic the area where these dinosaurs have been found would have been a floodplain, a great place for food. It would have periodically dried out during the dry seasons though, it would make sense for the dinosaurs to leave for pastures new.

We need evidence though, and evidence is now what we have. Scientists analysed the oxygen isotopes in the teeth. Certain ratios of these isotopes determine by what water they drank. It was discovered that the ratio in the teeth was different to that of the ratio in the floodplain, suggesting that the dinosaurs migrated and drank water from a completely different area.

Further analysis showed that the isotopes changed over a period of 5 months, inferring a seasonal change.

Can you imagine? Giant sauropods, hundreds of them, on a great migration in search of food and water. Another interesting fact to add though is that it wouldn’t just be sauropods migrating. When modern herbivores migrate predators follow them. It’s thought the same probably happened in the late Jurassic but by the extremely successful predator Allosaurus.

Just a quick post about a new upcoming BBC TV series. Planet Dinosaur is all about, well, Dinosaurs. We’ve all seen Walking with Dinosaurs (1999 – Yes, it really was that long ago), or so I hope, but there have been multitudes of new discoveries over the past 12 years by paleontologists. This series will be bring us up to date, all with some pretty outstanding graphics.

The series starts this Wednesday (14/9) at 20:30 on BBC1. Yes BBC1, it’s great to have this kind of science on at prime time on BBC1. Whilst it may look that it’s mainly aimed at kids I’m pretty sure lots of older people are going to find it pretty interesting too.