I recall, many years ago when I was younger, having a CD-ROM of, I think, the encyclopaedia Britannica. It contained a wealth of interesting information. I remember one such aspect of it where you could play around with the Moon’s orbit. A great, unbeknown to me, celestial mechanics lesson. There was also a small section on the Moon landings. I could watch Neil Armstrong’s first steps over and over. And I did. I was enthralled.

Years later my interest and passion for space had developed. I began to truly understand what the Moon landing’s were about, the great energy and determination behind them, the huge risks involved and the human need to explore.

For me, the Moon landings have shown me more about what it is to be human more than anything, and it all began with Neil’s first small step.

Even today when I watch footage of the Moon landings, I feel shivers creeping up my spine, sometimes even a tear develops in the corner of my eye. It’s almost a non-religious numinous experience. I just fill with awe over the grandeur of it all. We really did this, I have to say to myself. 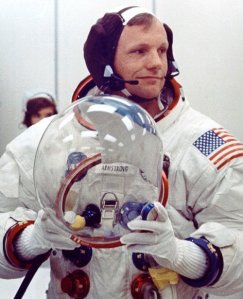 So I was incredibly shocked and saddened to hear about the loss of Neil Armstrong on the 25th August. He had inspired me and many millions of people across the planet. He was a reluctant hero but he embodies the true human spirit of adventure and exploration, and for that, thank you, Neil.

We can hope now that this sad news spurs on our next great adventure, that it enthuses another generation of people to learn STEM subjects and that it urges politicians to develop the worldwide space effort.

There’s a great many literature on the Apollo missions and they’re a great read. There’s a lot I never knew about Apollo that is fascinating. I’ve recently finished Failure Is Not An Option and Apollo 13. I’ve also recently ordered A Man on the Moon, that I understand is the best Apollo book around. You should also check out the great TV series’ From the Earth to the Moon and NASA’s Greatest Missions: When We Left Earth and the film documentaries Moonwalk One and In the Shadow of the Moon.

12 men walked on the surface of the Moon.
No one has returned or ventured farther.